Title: High Five Dive
Author: Adrian Fridge
Genre: M/M romance, speculative fiction
URL: Amazon
Price: FREE
Summary [from the publisher]:
t’s been 200 years since mankind first settled on Mars… and found about about the aliens… and had a big War… but this is not about all that.

After his ship stalls on his way back to the Mars colonies, Clark Waters is forced to confront his childhood menace and brother’s best friend, the very same Evan Mitford who owns the repair shop in charge of fixing this problem. Hot, hot Evan who he’s been secretly attracted to for ages and who is now invading every inch of his life. Insults traded and barriers broken, someone’s getting f*cked.

“Evan ran a hand through his short and wavy black hair, complementing his tanned beige skin as he gave me his prize-winning smile, full of teeth ready to be punched.”

The photo or the prompt this story was based on didn’t really grab me, but I totally love the author’s imagination at work here. Instead of setting the story in a rural American town featuring ultra-masculine men with limited vocabularies, he placed his characters in the distant future, when Mars is now an industrialized human settlement. 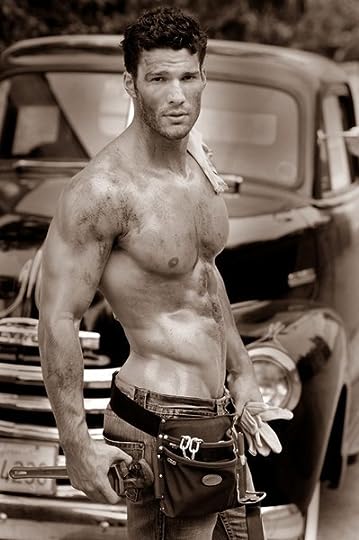 Clark Waters is a student attending Mars University and working long hours in a lab as a research scientist.

Evan Mitford works as a mechanic, is Clark’s brother’s best friend, and the man he has secretly admired since childhood. Prankster that he is, Evan irritates Clark to no end, so he does his damnedest to avoid taking his stalled ship to Evan for much-needed repairs. Too bad Clark has no other alternatives.

I really enjoyed this. Backstory was skillfully added without breaking the flow and interrupting my immersion in the world created. The dialogue was clever, the sex was hot, and the story was told with warmth and humor.

Even though I wanted to smack Evan, I loved these guys together.